Adam Grant is an organizational psychologist at the Wharton School of the University of Pennsylvania. He is a leading expert in the discovery of how we can best find motivation and meaning, which will lead to a more generous and creative life. He is the author of four #1 New York Times bestselling books, including Give and Take: A Revolutionary Approach to Success; Originals: How Non-Conformists Move the World; Option B: Facing Adversity, Building Resilience, Finding Joy; and Power Moves.  His work has been recognized as among the year’s best by Amazon, the Financial Times, Harvard Business Review, and The Wall Street Journal—and praised by J.J. Abrams, Richard Branson, Bill and Melinda Gates, Malcolm Gladwell, and Malala Yousafzai.

Grant’s newest book, Think Again: The Power of Knowing What You Don't Know, available February 2021, examines the critical art of rethinking and learning how to question one’s own opinions while opening the minds of others. He believes this redirection can position you for excellence in your career and your life wisdom. His book proposes that we don't have to believe everything we think or internalize everything we feel. It's an invitation to let go of views that are no longer serving us well and prize mental flexibility over foolish consistency—if knowledge is power, then knowing what we don't know is wisdom.

Grant's TED talks have received more than 20M views and he hosts the chart-topping TED podcast WorkLife with Adam Grant. He has been recognized as one of the world’s 10 most influential management thinkers; has appeared on the Fortune’s 40 under 40 list; Oprah’s Super Soul 100; and he is a World Economic Forum Young Global Leader.  He has also received distinguished scientific achievement awards from the American Psychological Association and the National Science Foundation. Grant’s speaking and consulting clients include Google, the NBA, Bridgewater, and the Gates Foundation. He writes for the New York Times on work and psychology and serves on the Department of Defense Innovation Board. He received his B.A. from Harvard and his Ph.D. from the University of Michigan and is a former Junior Olympic springboard diver. 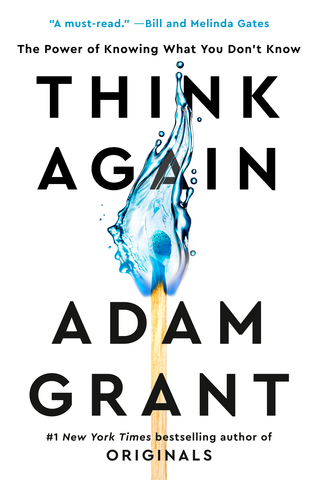