Our country and our culture are on the brink of change, of an evolution—no—a revolution. As visual storytellers, we are positioned to present visions of social change by reaching out to unheard voices. In collaboration with creators traditionally underrepresented in comics, the Represent! Series ensures that this transformative moment in civil rights history is honored, preserved, and shared.

These compelling 10-page digital stories will spring from the real-life experiences of our contributors, beginning with Cooper’s semi-fictionalized account of his very real evolution from a kid with a pair of binoculars to thrust into a worldwide spotlight after his altercation with a dog owner in Central Park.

Christian Cooper is a writer and editor, a longtime birder, and a board member of the New York City Audubon. Upon graduating from Harvard, he worked in the comic book industry through the 1990s. Throughout that time and into the present, he has been active in LGBTQ and Black rights and progressive political movements. His latest work, the critically acclaimed It’s a Bird, is the debut chapter for DC’s digital comic book anthology series, REPRESENT!.

Marie Javins, DC’s Executive Editor of Global Publishing and Digital Strategy, has long specialized in finding the intersection between cultural storytelling and comic book creation, sparked by personal encounters as she travels the world. She has edited countless comics, books, and graphic novels including Superman Smashes the Klan (Gene Luen Yang, Gurihiru), Exit Stage Left: The Snagglepuss Chronicles (GLAAD Media Award 2019, Mark Russell, Mike Feehan et al), Harley Quinn Breaking Glass (Mariko Tamaki, Steve Pugh), and for nearly a decade was the editor in chief of a Kuwaiti comic book company specializing in superheroes based in the Muslim world. A graduate of Antioch College, Javins has taught at New York’s School of Visual Arts, written nine books, and traveled twice around the world via public transport. She is dedicated to facilitating the power of story to create a just and more compassionate world.

Alitha Evelyn Martinez is an Eisner Award and GLAAD Award-winning artist of the Black Panther: World of Wakanda series. Her professional career began in 1999 penciling Iron Man and since then, she says it’s been a great ride getting to work on a wide range of titles and projects that required more than just penciling and inking. She has also illustrated political cartoons for the New York Post. Martinez is currently a professor at the School of Visual Arts in New York City.

The most rewarding part of her career is participating in the US State Department’s World Speaker Program. She has traveled to parts unknown to teach comic book workshops and bring the art of storytelling to people who would have no other way of getting such information. Once in the same position, practicing a craft that unknown to her was a profession. She loves representing her country and her industry. 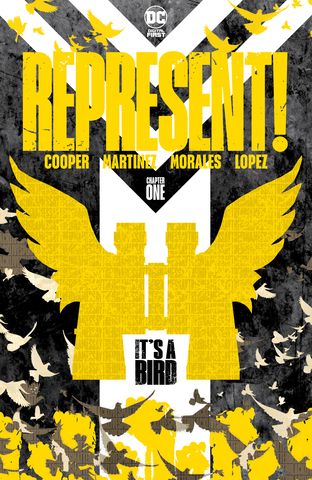