Joy Harjo is an internationally-renowned musician, playwright, and author. Born in Tulsa, Oklahoma, she is a member of the Muscogee (Creek) Nation. In June 2019, Harjo was appointed as the 23rd Poet Laureate in Poetry to the Library of Congress. She is the first Native American to hold the honor and was reappointed to a second term in April 2020.

She is the author of nine books of poetry, the highly acclaimed An American Sunrise; Conflict Resolution for Holy Beings, shortlisted for the Griffin Prize and named a Notable Book by the American Library Association; The Woman Who Fell From the Sky, which received the Oklahoma Book Award; and In Mad Love and War, which received an American Book Award and the Delmore Schwartz Memorial Award. Her memoir, Crazy Brave, was awarded the PEN USA Literary Award in Creative Non-Fiction and the American Book Award.

She has published several screenplays and collections of prose interviews; three plays, including Wings of Night Sky, Wings of Morning Light, A Play, which she toured as a one-woman show and was recently published; and two award-winning children’s books, The Good Luck Cat and For a Girl Becoming. She is executive editor of the anthology When the Light of the World was Subdued, Our Songs Came Through: A Norton Anthology of Native Nations Poetry, a work of more than 160 poets, representing nearly 100 indigenous nations, available now.

Additional honors include the Ruth Lily Prize for Lifetime Achievement from the Poetry Foundation, the Academy of American Poets Wallace Stevens Award, Lila Wallace-Reader’s Digest Fund Writers’ Award, two National Endowment for the Arts Fellowships, and a Guggenheim Fellowship. She is a chancellor of the Academy of American Poets, a founding board member of the Native Arts and Cultures Foundation, and the co-director of "For Girls Becom­ing", an arts men­tor­ship pro­gram for young Mvskoke women. 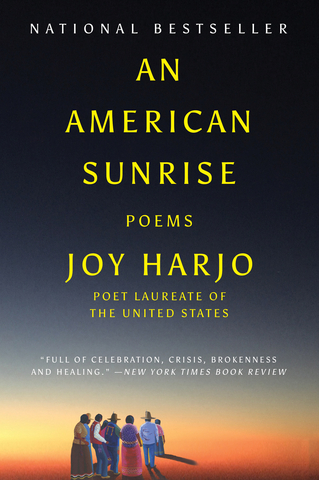