Matt de la Peña is the Newbery Medal-winning author of Last Stop on Market Street. He is also the author of the award-winning picture books, Carmela Full of Wishes, A Nation’s Hope: The Story of Boxing Legend Joe Louis,and Love. de la Peña has written seven critically-acclaimed young-adult novels — and he teaches creative writing and visits schools and colleges throughout the country.

Christian Robinson has received a Caldecott Honor and a Coretta Scott King Illustrator Honor for his art in Last Stop on Market Street. He is the bestselling author and illustrator of the picture books Another, You Matter, Carmela Full of Wishes, the Graston and Friends series, School’s First Day of School, and The Smallest Girl in the Smallest Grade.

Written by de la Pena and illustrated by Christian Robinson, Milo Imagines the World will be available in February 2021. “America has the highest incarceration rate in the world, a fact that disproportionately affects people of color,” said de la Peña. “This is the backdrop of our new collaboration, inspired by Christian’s own childhood. But Milo’s journey to visit his mom is about so much more than forced separation. It’s also about joy. And imagination. And curiosity. And the power of self-expression. It’s about the importance of being able to move beyond lazy stereotypes.”

“Milo’s story is my story,” said Robinson. “Like Milo, I grew up with an incarcerated parent. I rarely, if ever, saw stories that reflected this reality. As a child, I felt a lot of shame and embarrassment and thought it was something I had to keep secret. But many kids share this experience, and Matt and I want to send the message that they are not alone.” 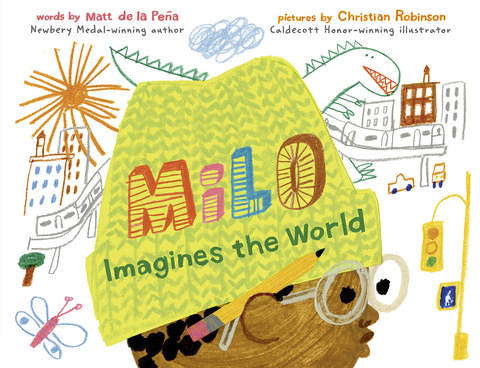